When My Daughter Told Me About Her Symptoms, I Knew She Had Her First Yeast Infection

Life brought many new changes when my daughter went to college, and her first yeast infection was one of them. When she called me on a Friday worried about symptoms—vaginal itching, discharge that was thick, white and lumpy like cottage cheese, burning—I suspected it was a yeast infection, so that weekend she came home and we confirmed it with our doctor.

If you’re like me, your daughter’s health is as important as your own. It’s comforting to know that vaginal yeast infections are common and treatable. But why do we girls and women get yeast infections? I probably should have talked to her about this before she left for college, and I encourage all moms to do just that so she knows what to expect and how to potentially avoid getting one!

So let’s be clear about the cause: it’s about the overgrowth of yeast in the vagina. Here are some possible yeast infection causes:

Too much food for yeast to grow…

Not enough bacteria to keep yeast in check…

How to help her prevent yeast infections

Here is some advice you can give her on how to help prevent yeast infections:

“My daughter called from college, worried about her symptoms. I knew it was a vaginal yeast infection. Moms know best. When I get a yeast infection, I turn to MONISTAT®. Now she does too.” 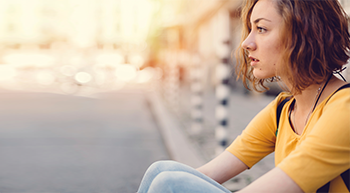 MONISTAT® comes in 3 doses: highest dose MONISTAT® 1, regular strength MONISTAT® 3, and low dose MONISTAT® 7. Regardless of which product you choose, you should begin to experience some symptom relief after 3 days, and complete relief in 7 days.

MONISTAT® 1 may be the perfect solution for busy women with active lifestyles. This powerful, single-dose product is available in the convenient Ovule® that adheres to the vaginal walls for fast relief. It stays in place and can therefore can be used during the day or night, making it a great solution for women who don’t want to wait until bedtime to begin treating their yeast infection, or those who exercise frequently or engage in a high level of activity.

Regular strength MONISTAT® 3 is a great option for women who want a less concentrated treatment that provides consistent treatment and relief at moderate dosage levels.

Low dose MONISTAT® 7 is that original formula with smaller, less concentrated doses of the active ingredient evenly distributed throughout the week at bedtime. Only 7-day topical yeast infection treatments are recommended by the Centers for Disease Control and Prevention (CDC) for the treatment of yeast infections in pregnant women and diabetics (consult your healthcare professional).